This husband might just be the bravest, stupidest person in the whole wide world. While there are plenty of sagging relationships in need of a sensual resurgence, perhaps it’s not the best idea to send your wife an Excel spreadsheet of you cataloging every single spurned sexual advance made by you over seven weeks.

The wife  in question described the entire situation on the r/relationships subreddit:

Yesterday morning, while in a taxi on the way to the airport, Husband sends a message to my work email which is connected to my phone. He’s never done this, we always communicate in person or by text. I open it up, and it’s a sarcastic diatribe basically saying he won’t miss me for the 10 days I’m gone. Attached is a SPREADSHEET of all the times he has tried to initiate sex since June 1st, with a column for my “excuses”, using verbatim quotes of why I didn’t feel like having sex at that very moment. According to his ‘document’, we’ve only had sex 3 times in the last 7 weeks, out of 27 “attempts” on his part.

And for those pining to get a look at this guy’s Excel madness, she provided a glimpse at the spreadsheet. 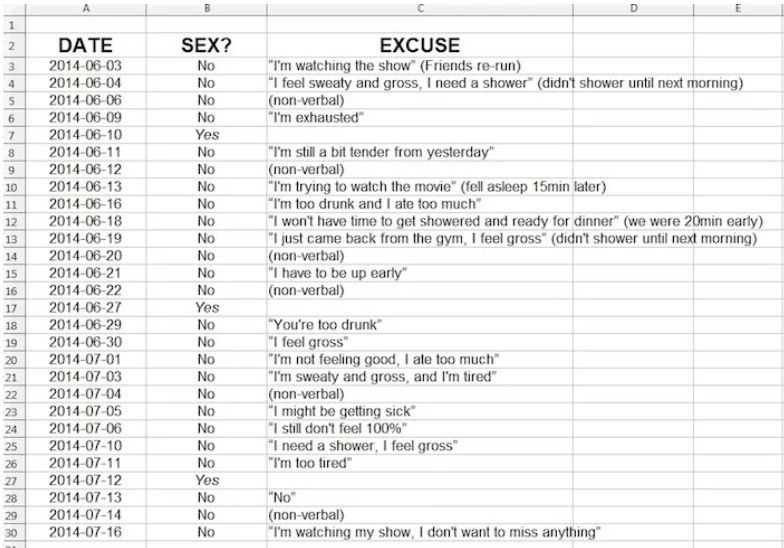 With a success rate of about 10%, it’s clear that this guy is pretty demoralized by his marriage’s dearth of hanky pank. That being said, using the organizational prowess of Microsoft Office probably isn’t the way to light that fire in her loins, pal.

While the couple are young (both 26), they sound like a sitcom duo from the 60’s, with her cooking, cleaning, and generally taking care of things around the house while he does little to help. (Hot Tip: doing the laundry from time to time is the hottest thing you can do for your wife.) She goes on to explain her side of the story:

This is a side of him I have never seen before – bitter, immature, full of hatred. In person, he’d been acting normal the whole time, maybe a little standoff-ish in the last week. Completely out of left field. Our sex life HAS tapered in the last few months, but isn’t that allowed? We are adults leading busy, stressful lives. I cook for him, I do his laundry, I keep our house clean and tidy. It’s not like our sex life was going to be this way FOREVER, it was a temporary slow-down due to extenuating circumstances.

She went on to explain that she tried calling him but to no response. It seemed like he had cut off contact completely, again, a really dumb move on his part.

Users of the subreddit immediately jumped in to take sides. 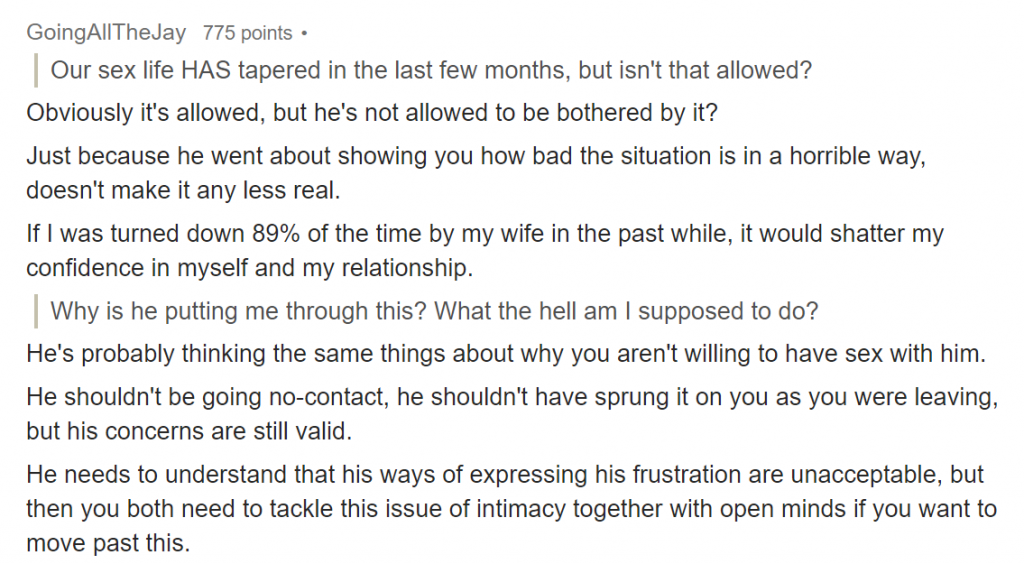 Here’s to hoping she claps back with a passive-aggressive “per your email” response, though that might not be what’s best for the relationship. And fellas, take this guy’s misfortune as a deeply-engrained lesson: don’t send your wife spreadsheets.